This is my final project for Alternative voices where I have to talk to someone who is 40 years old and above about Kuala Lumpur. It is called â€˜Emotional Tour of KLâ€™.
Location : Jalan Raja Laut, Kuala Lumpur.

It took me some time to figure out how to work this project. Now that it is done, I decided to post it up here.
I’m not too sure but maybe this isn’t as good as I want it to be. Time constraint you know and how ideas only flow at the very last minute. Yah, the idea thing always happened to me. Pressure and stress give me ideas, damn.
I started doing this project on Thursday midnight and I’ve to hand it in before Friday or on Friday itself.
And then my lecturer decided to be a goody goody man and extended the date line to Sunday because there’s still a lot of my coursemates that have yet to finish their work. Sigh, why cant he decide to be a good man and extend the time before I finish my project? A little unfair to those who rush and finish their project on time, no?
Whatever, I’ll forgive him for that because he’s so gonna lend me this book that I’ve been longing to read.
Like finally I get to have a chance to read this book, ‘Chin Peng : My side of history’. Can’t wait to get it from his hands next semester. (:

Anyway, I’m done babbling.
Do read my project and tell me what you guys think. It actually means quite a lot to me.
And oh, pictures after the jump.
Thankiuu. (:

Everybody has got a story to tell be it a successful entertainer or an old lady you bump into at the market.
And everyplace too has got its own story ready to be unfold anytime.

This is a story of a forty-four years old petite Chinese lady whose name is called Kelly with the surname Chan.
Born and raised in Bentong, Pahang, Kelly is eager to find out what it is like to stay in big cities when she is young.
Not a highly educated lady as she only receives her education until Form 3 but that does not stop her in voicing out opinions and thoughts.

Having six siblings at home isnâ€™t something to be proud of as her family is not at all wealthy. Kelly is the fourth child. One by one they leave their house; the eldest sister gets married and moved to Kuantan while the second sister shifts to another street at Bentong.
The remaining ones, one after another left to a place called Kuala Lumpur.
Kelly left at the age of sixteen to explore and discover new things in life at a place she always dream of going. The big city, Kuala Lumpur.

Her first job at KL is being hired as a seamstress and the paid is only around Rm200 back then. She rents a room at Ulu Klang that cost Rm80 every month which is quite a big amount she said. Therefore she shares a room with her cousins and friends, four young ladies in a room.
â€˜We sleep there, we eat there, and we basically do everything in that one tiny roomâ€™ Kelly said. Not something I can imagine myself doing; I suddenly realize how lucky I am to have a room all by myself.

She worked as a seamstress for four years and she left for another job when she saw a job vacancy hiring cashier in the newspaper. She told me that she canâ€™t be a seamstress forever.
She begins her journey as a cashier at a karaoke and bar shop called Mings at Jalan Raja Laut at the age of twenty. During that time, Mings is the place where she spends most of her time at and she had a lot of fun working there.

Kelly said, â€˜My job as a cashier is easy and at the same time I get to enjoy myself there. Musics are being played all day long where I can even sing to entertain myself and the customers. Working at Mings is like playing and having fun with your friends.â€™
Not only can she enjoy herself with friends and customers there, she also have a reason to dress up herself nicely everyday she goes to work.

Kelly experience fright and love at the same place, Mings. It shocked and frightened the petite lady when a burglar went in to Mings holding a gun. She said â€˜He snatched everything he could and all of us are so frightened to even make a squeak. Iâ€™ve got no choice but to hand in all my money.â€™

It seems like one unlucky event comes after another because months later when Kelly walked off from Mings with her customer or friend as she prefer to call him, a thief walked past her and snatched her handbag. She stood there feeling stone but her guy friend chase after the thief.
After chasing, he came back with an empty hand and a sick face. He threw up right there in front of her.
She felt so touched, thatâ€™s where the love begins.

It is at Mings that she found her true love who she marries later on. She still works at Mings after married and giving birth to a baby girl but stopped during the nineties when she starts up her own business.
She still goes to Mings once in awhile with her husband and children but she never expected to go back there again for a different reason in the future.
She never thought that she will ever go back to Mings again but things took a serious downturn.

She lost her husband to cancer during year 2000 and the business she had back then is not earning her any money to continue support her family.
She made a decision and closes down her business, went back to Mings and started working there once again. This time, her job scope is no longer as a cashier but she is there to entertain customers, to drink with them. At the age of 36 with two kids in hand, that is what she needs to do.

It has been so many years and she is still working at Mings, drinking with the customers every day. Looking at her face, telling me this story of hers I feel a sudden ache at my heart. How much hardship she has been through after losing her husband, to only go back to a place she never thought of going back.

She showed me photographs of her working at Mings during her twenties. Inside the pictures, I can feel that she really enjoys her work and her eyes somehow tell me how happy she is back then.
But at this moment when I stare at her face, I know she no longer is as happy as last time. There isnâ€™t much passion left.

“Kuala Lumpur gives me too many memories especially at Mings where I worked for so many years. KL definitely changes a lot. From a few cars on the small road to so many cars causing traffic jams on highways. Last time, Iâ€™m afraid of burglars and thieves but today, Iâ€™m even more afraid. I dare to say other than the skyscrapers, KL is really getting worse. Every day when I opened up the newspaper, there must be a few cases of snatch thieves here and there. Living in KL is living in fear. Sometimes I really wish to stop working and shift back to hometown to stay but of course Iâ€™m not allow to as I still have to bring up my two children. Kuala Lumpur is a big city but now I know big city is never like what I dream of.” 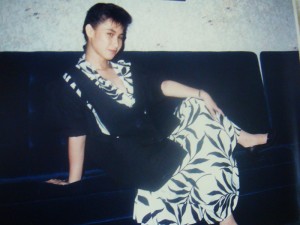 * The lady at Mings. 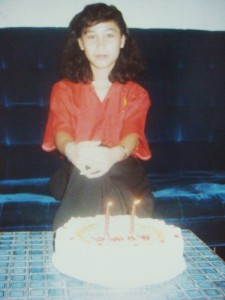 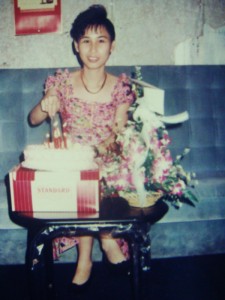 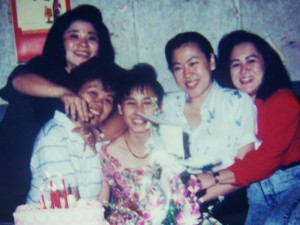 * Looking really happy with her bunch of girlfriends.

She celebrates her birthdays at Mings for a lot of years now, from twenties to thirties and from thirties to now forties. Hopefully during her fifties she need not celebrate her birthday at Mings anymore.

The pain in her, maybe none of us can understand. Just right before we end our conversation, she told me she found someone that is dear to her heart a few years ago. I wish that someday she donâ€™t have to go back to Mings for work as I hope she only goes there to pay a visit to her friends.
I wholeheartedly wish this pretty petite lady well.

p/s: Something that she didn’t really tell me herself but that is what i see in her. Do click on the pictures for larger version.