I enjoyed my Chinese New Year and I really hope it didn’t pass by this fast.
I WANT MOARRRR!!!

I’ve been wanting to go to a temple for some praying lately and I finally spent my Monday afternoon doing it.
I went to Sin Sze Si Ya Temple which is located at Petaling Street, and coincidentally they offered ‘Sip Tai Sui’ service.
I’m not too sure if every temple offers ‘Sip Tai Sui’ service because this is the first time I came across it.

Some of the people who landed on my blog googled for ‘Sip Tai Sui’ because I’ve once mentioned about it and so I decided to blog about it for real this time since I’ve already did it and know how to.
But before I go deeper into that, I would like to let you know more about Sin Sze Si Ya Temple. (I sound like an old grandma promoting a temple dafuq.)

Sin Sze Si Ya Temple is no ordinary temple. It has been there since 1864 and it is built by Yap Ah Loy, almost 150 years located along Jalan Tun H.S Lee 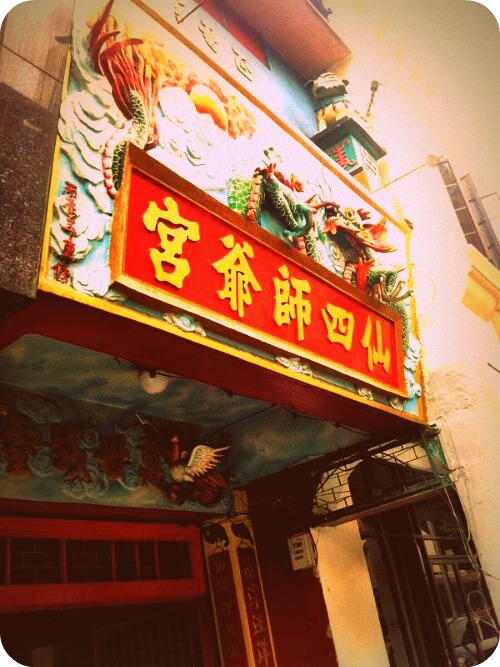 Located in the Chinatown area near Central Market, the temple was built by Kapitan Yap Ah Loy-one amongst the founders of KL, in 1864. Sze Ya Temple is the local version of Sin Sze Si Ya Temple. Its unique structure is a fine specimen of the traditional Chinese architecture, based on Feng Shui principles. The temple boasts of elaborate interiors and intricate roof ridges. It is said to have been built by craftsmen from southern China.

The temple is dedicated to Sin Sze Ya and Si Sze Ya, the patron deities of the residents of Kuala Lumpur. Sze Ya Temple is different in a way that the deities worshipped here are not the Chinese traditional deities, rather two people who were elevated to the position of deities for their merit. It is believed that the prophecies of Sze Ya guided these people during the Selangor Civil War and made them to triumph. And that’s how, these people happened to be worshipped by the locals.

The temple was first built by Yap Ah Loy in the 1864 in honour of the famous Kapitan Shin Kap of Sungei Ujong (present day Seremban) whom Yap Ah Loy had worked for before and during the Sungei Ujong conflict in 1859. During this conflict, Kapitan Shinâ€™s hurriedly assembled force was defeated and Kapitan Shin himself was beheaded after being captured by the opposing Malay forces. His death was extraordinary in that the blood that gushed out after his head was chopped off was white and not red. In Malay belief, the spilling of white blood by a dying person indicates that the person is a saint. When the Malays saw this, they begged for forgiveness and allowed the Chinese to retrieve his body for burial. As a result of Kapitan Shinâ€™s miraculous death, the local Chinese began to worship him as a deity and he became the guardian deity for Chinese miners in Malaya.

It was said that Kapitan Shin had appeared to Yap Ah Loy in a dream telling him to go to Kuala Lumpur where he would have better prospects. Perhaps it was due to this dream or that Yap Ah Loy had heard stories that Kuala Lumpur possessed large tin reserves, that he finally decided to foresake the Sungei Ujong Kapitanship that he had inherited, and take up Liu Ngim Kongâ€™s (the then Kapitan Cina of Kuala Lumpur) offer of a position in his business.

When Yap Ah Loy succeeded Liu Ngim Kong to become the third Kapitan Cina of Kuala Lumpur, he relocated Kapitan Shinâ€™s temple from its original site in Sungei Ujong to a house in Kuala Lumpur in 1864.

In 1885, after he had made a fortune from the soaring tin prices, he relocated the temple to its present site at the north end of Jalan Petaling in Kuala Lumpur. It was said that during the Civil War, Kapitan Shin had appeared several times to Yap Ah Loy in his dreams to give him advice. He advised Yap Ah Loy to train archers, and that there was a man among his soldiers who knew how to make rockets with bamboo and gunpowder.

The identity of the second effigy is less certain. The temple’s version of the story says that subsequent to the civil war, Yap Ah Loy added the effigy of Chong Piang (also known as Chong Sze) alongside Kapitan Shinâ€™s, as well as tablets of soldiers who perished in the war, so that people may pay respects to them.

Some history class going on here haha.
I’m very lazy to rewrite and rephrase everything okay! Must make full use of copy and paste, such a great invention!

So, for 2012 Dragon Year the four chinese zodiacs that ‘Fan Tai Sui’ are Dragon, Dog, Goat, and Ox.

Tai Sui å¤ªæ­², is actually how the ancient Chinese astronomy name the planet of Jupiter. The word Tai å¤ª means very big, biggest, or grand, and the word Sui æ­² means age. The ancient Chinese observe the pattern of how the planet of jupiter orbits and cycle around planet earth in 365.5 days to record their calendar of a year. Therefore, this planet is called the Tai Sui, because it cycle onces around our planet and a year pass by. Now what is â€œfan tai suiâ€?

Around the planet of Jupiter, there are 60 little moons. (Science proven) There are 4 biggest moons that orbits around the planet of jupiter that do not orbits with the same direction of Jupiter. Therefore the counter force created frictions in energy over time and creates a beam of harmful radiation like energy that beams through the sun and through earth as well. Every year, there are then 4 different beams of these harmful energy that will affect everything on earth including human beings. The energy is not as harmful as those like nuclear bombs but then it is a very subtle energy beam that will get your life bumpy, stuck, and a lot of things just donâ€™t go right, creating conflicts, arguments and lots of frustrations that make your year hard to walk.

To some people, this is ridiculous.
Yes, it might be but this to me is called ‘æ±‚ä¸ªå®‰å¿ƒ’ which in a way means ‘praying to make self feel better’ LOL.
A lot of people pray to make themselves feel better okay! Don’t deny!
So the first and foremost before you go to “Sip Tai Sui’, you need to know the time and your date of birth.
Everyone knows their date of birth so that wouldn’t be a problem but most of us do not know what time we first came to this world.
For ‘maximum effect’, please check out your birth certificate for your time of birth.

Of course the next step is to go to the temple, then get a number from the counter and wait for your turn.
Also, take note for bananas like me who do not know how to write in Chinese, please at least know how to write your Chinese name.
Because without your Chinese name, it wont work.
The uncle who worked there will then write whatever that is needed onto some kind of Chinese praying yellow paper and you’re good to go …… to pay money.
Pay, grab your stuff that is given to you and you can start praying.
And you’re done!

I prayed a lot this afternoon and I ‘Kao Chim’ (Chinese Fortune Sticks) too and the auntie told me it’s a rather good ‘Chim’ whereby I’ll get what I asked for if only I’ll work hard for it.
I was really happy upon hearing that!
God has been treating me good thus far because each and everytime I ‘Kau Chim’, I did not get any ‘Har Har Chim’. (:
In case you don’t know, ‘Har Har Chim’ means ‘Down Down Chim’ which means bad fortune sticks.
I better not jinx it!

So for those who ‘Fan Tai Sui’ this year and would like to ‘Sip Tai Sui’, you can go to Sin Sze Si Ya Temple to ‘settle’ it.
For those who are on the luckier side, you can still go over and pray for yourself and your family members.
And finally for those who do not believe in whatever I said, you too can go over to have a look at this historical temple for viewing pleasure. (:

This time round I did not take any pictures of the temple because Fatty once told me that it is very rude to take pictures in a temple, so I try not to.
Exception: When I travel LOL.